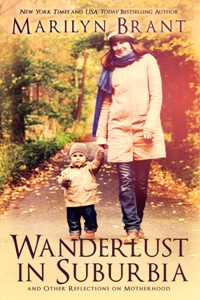 NONFICTION – Essays on Motherhood
*
New York Times & USA Today bestselling author Marilyn Brant offers something unique and personal to the fans of her fiction and to new readers alike — a collection of 21 essays and 5 poems on the subject of motherhood, filled with the warmth, humor, and astute observations that are a trademark of her novels.
*
Wanderlust in Suburbia and Other Reflections on Motherhood is a “tribute to our mothers and our grandmothers. To our women friends. And to all of us as well.”
*
Please read below for an exclusive excerpt!!
*

**PAPERBACK can be purchased through Amazon HERE and B&N HERE!!**

LEANING TOWARD OPTIMISM
by Marilyn Brant (copyright 2015, all rights reserved)

Once, in our newly married, pre-parental days, my husband and I were vacationing in Northern France. We liked to consider ourselves deep, serious people throughout much of the year, having spent—as teachers—many months juggling pressing student concerns with demanding academic requirements. But this was summer. It was a time for rest, relaxation, and a wild jump into fun foreign culture. We took this initiative to heart. A reward to ourselves for a school year successfully concluded.

Thus, while we were diligent in visiting virtually every historical site in Normandy—from the infamous WWII beaches to the Bayeux Tapestry—our days were interspersed with crepe or cider taste testing, long walks around castle ruins, and window-shopping at patisseries. We were happy.

Back at our quaint, postcard-perfect inn after one such joyful day, I was flipping through a Parisian women’s magazine I’d come across in the lobby. Bypassing fashion articles and other perceived drivel, I settled down with a story on the performing arts. Now, my French, while never extraordinarily fluent, was adequate enough for me to be insulted by a line I read about midway through the piece. It was about Americans. The young female writer was making the point that American audiences didn’t appreciate certain theater productions because “happy endings are so important to them.”

Upon translating this, I stopped mid-column and reread that line several times before finally calling out to my husband, “Hey, listen to this!”

We bristled at the snub—certainly intentional, we felt. We believed, much like Meg Ryan’s character in When Harry Met Sally, that we could be as dark and brooding as anyone out there. Of course we were generally optimistic. We wanted the good guys to win, the ugly duckling to turn into a beautiful swan, and the poor servant girl to finally get to be the belle of the ball, but was that a reason to assume we couldn’t handle the alternative?

Finally, recovering our good humor with the help of some hard cider and a chocolate pastry, we dismissed the remark, attributing it to an unfair stereotype of Americans held by “a snobby contingency of Old World elitists who’d convinced themselves that those of us living across the pond lacked culture.”

Now, some years later, while I can’t speak to the current beliefs of elitists (Old World or otherwise), nor would I deign to put words in the mouths of my fellow American citizens, I feel I’ve grown to accept my inclination to such hopefulness, beyond merely a superficial preference for a “happy” versus “sad” ending.

I’ll admit, I smile to myself when I think back to that article…to that time period. Perhaps the writer had been aware of an element of our nation’s personality that I’d chosen to overlook: We Americans do appear, quite often, to be pretty happy-go-lucky in the eyes of the rest of the world. Hollywood turns out a slew of movies every year with the latest big-name stars featured in films with upbeat endings. And we continually admire the underdog athletes who help their teammates come from behind to take the championship or the Olympic gold. But every country treasures their heroes, their triumphs, their Cinderella Stories.

Or, maybe there was a human element that both the writer and I were trying to be too hip to value. Perhaps that adolescent desire for cool detachment was still too much with us then. After all, it’s hard to be taken seriously in any art—especially writing or drama—if your work appears simplistically cheerful or lacks a sharpened sense of cynicism. But, whatever the reason for her argument or mine, discussion of that kind somehow smacks of either innocence or ignorance now. Parenthood has changed it all for me.

Currently, as a mother and, I hope, as a more aware citizen, I don’t even want to pretend to be dark and brooding. I openly and unabashedly want happy endings in as many situations as they can be arranged. I want Planet Earth to be well cared for and pollution-free, with clean air and water, restored rainforests, and an abundant animal population. I want the needs of the world’s children—my son’s peers—to be so well fulfilled that they all grow up to be healthy and loving adults. I want to see our amazing human creative potential directed in positive channels. I want to short-circuit apathy, elitism in any form, and behavior that pulls people apart instead of bonds them together. And, yes, I even want everyone to sing, sing a song…

Happiness may not provide much intrigue or dramatic flair, but I would joyously forgo any sense of theatrical discontent to bring back to all of us that blissful illusion in childhood when belief in happy endings is unquestioned—the natural and expected outcome.

As for all of the famous historical sites I saw abroad, I cannot think of them now as independent entities or as separate from our current history; I no longer have the luxury of such detachment in that arena either. They are linked in time’s memory to us and to each other. The earth and its history have all become part of an interconnected cultural dance in my mind—the way it always had been in reality, I guess, whether or not I was willing to see it.

Yet another lesson parenthood has taught me: We are not alone in life’s struggles. Ah, but we can all hope for the best, can’t we?

And, somehow, I suspect that the French writer—especially if she is now a mother, too—feels the same way.