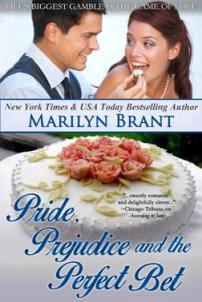 The companion book to Pride, Prejudice and the Perfect Match and a new Austen-inspired romance! **Note to readers – this story is part of the “Perfect” series, but it can be enjoyed as a standalone novel.**

Everyone thought Beth Ann Bennet and Dr. Will Darcy had an unexpected romance in Perfect Match. Now, Beth’s best friend, Jane Henderson, and Will’s first cousin, Bingley McNamara, begin their own unlikely love story in Perfect Bet, which starts at the Darcy/Bennet wedding when they find themselves in the roles of maid of honor and best man for the newlyweds.

Jane is an interning school psychologist and a woman who wears an angelic mask in public, but she’s not as sweet tempered as she’d like everyone to believe. Turns out, she may have just crossed paths with the one person who’ll unnerve her enough to get her to reveal her true self.

As for Bingley, he’s a wealthy, flirtatious and compulsively social guru of finance, who likes to wager on stocks and, let’s face it, on just about anything that strikes his fancy. But this dedicated ladies’ man may have finally met the woman who’ll challenge his bachelor ways!

Pride, Prejudice and the Perfect Bet…where life’s biggest gamble is the game of love.

Pride, Prejudice and the Perfect Bet is an original Austen-inspired romantic comedy about two seemingly “very nice” people who have a little more of a dark side than they like to let on… Can these two commitment-phobes finally find love? I hope you enjoy this excerpt of the book (copyright Marilyn Brant 2014)!

Bingley McNamara stood near the altar of St. Andrew’s Presbyterian Church, right next to his cousin, Dr. William Darcy—the lucky groom on this lovely September Saturday. The two men watched as the maid of honor glided gracefully down the aisle, every step in time with the distinctive thrum of the pipe-organ music overhead.

Jane Henderson, best friend of the bride, wore a silky, cocktail-length gown with a scoop neckline and some fun ruffly bits around the hem. Given the color her dress and her auburn hair, she was a vision in dark red. Appropriate, Bingley thought, since, when she spotted him, she shot him a look that was positively murderous.

Damn. This was gonna be a helluva long ceremony.

He adjusted his equally red bowtie, took a deep breath and nudged Will. “You ready, Cuz?”

Will nodded. “Absolutely. You got the rings?”

Bingley patted the jacket pocket of his tux. “Sure do. Nothing to hold you back now. I mean, if you still wanna go through with it and everything. Which you do, right?”

His cousin stared at him as if he were an escapee from a traveling circus act, planning to cartwheel down the center aisle of the church. “What?”

“All I’m saying is that, you know, there’s no pressure one way or another,” Bingley whispered. “You’ve got optionsavailable. If you want them. But I’m pretty sure you don’t. I know you love Beth and that she loves you and that you both love Charlie and that everyone in the family loves each other…and this whole wedding idea is just…just a really great thing. To do. Today. Right this very second.”

Bingley was well aware he was babbling but, man, his favorite cousin—his closest friend in all the world—was getting married in about three minutes. And though the bride was a genuinely wonderful woman and the soulmate his workaholic cousin desperately needed, Bingley knew he’d no longer be the go-to person in Will’s life after today.

Aw, who was he kidding? He’d lost his elevated position months ago—the minute Will had laid eyes on Beth Ann Bennet.

Will just shook his head and ignored the jabbering. Bingley sighed. Clearly, his cousin was only focused on his soon-to-be wife and was distracted by her beauty as she prepared to follow Jane down the aisle.

The organ music changed to the stately “Wedding March” by Mendelssohn, and the entire three-hundred-member congregation stood to watch as Beth serenely made her way toward Will, accompanied by her father.

Bingley, of course, was aware of Jane’s periodic glances in his direction—which could more accurately be described as piercing glares—but even she was finally paying more attention to her best friend than to him.

Still, he couldn’t help but sneak a few more looks at the fiery maid of honor, remembering the way they’d first met four months ago, around the time Beth and Will became an official couple. So much polite chitchat followed. He’d been on his best behavior (Will’s orders) and, yet, couldn’t deny his immediate attraction to Beth’s dearest friend.

But Jane had seemed so…nice, for want of a better word. Too sweet for him to want to tamper with or tease too much, although Beth hinted there was more to Jane than her pleasant veneer might suggest.

He hadn’t believed that at first but, oh, he believed it now, as she swiveled to face her friend, sending another death stare in his direction, then a much kinder, warmer look to his cousin and, finally, winking at Beth’s seven-year-old son, Charlie, who was in the first pew.

Charlie beamed a grin at her that infused his young face with delight, waved at Will and at him, too, and then squirmed to the edge of the pew so he could steal a few glances at his mom before she reached the altar.

“You’re gonna be really happy, Cuz,” he whispered to Will, who was smiling at Beth as if he’d just won the lottery and it was being hand delivered to him in a pretty package of white tulle.

“Thanks, Bingley,” his cousin murmured. “I owe you, you know. None of this would’ve happened without you.”

Bingley swallowed away a sappy emotion he didn’t want to succumb to in public and clenched his jaw to keep from saying anything either overly sentimental or just plain stupid. Much as the whole commitment thing gave him hives, Bingley couldn’t have been happier for Will. The guy deserved every ounce of wedded bliss.

“Anything for you,” he finally managed, meaning it, but unable to stop the wave of irritation that hit him in the gut when he caught Jane rolling her eyes at him from the periphery.

No, she wasn’t nearly as nice as she appeared, although he’d thought she was pretty awesome during the engagement party a couple of months back. Jane had downed, perhaps, a few too many glasses of celebratory champagne, and the two of them had ended up in the coat room, making out like teenagers. He quickly learned three other very interesting facts about her:

She wore some really racy undergarments beneath her simple, classically cut clothes.

She could do several wickedly imaginative things with her tongue. Both excellent discoveries, in his opinion.

But her emotions jumped up and down like an insanely volatile stock during a wild trading day.

Bingley exhaled and tried to stop his mind from playing the X-Ray Vision game every time he caught a glimpse of Jane standing demurely by the altar. Although, how could he keep himself from wondering if she had that leopard-spotted bra on underneath her red dress, like the one she’d been wearing in July, hmm? Or, why she had all but sprinted away from him when he saw her again a few days later, and why she’d studiously avoided him at the few other events they’d both had to attend since then… They’d barely made it past second base at the engagement party. Was she embarrassed? Had he unknowingly done something wrong?

He knew from years of experience that he was better off not caring about what women thought of him. That keeping his emotions out of any relationship was the key.

Seeing Will with Beth together had lulled him—temporarily—into believing that whole “happily ever after” thing might happen for him, too. Their connection through that online dating site had encouraged him—briefly—that a “Love Match” wasn’t impossible. So he’d entertained the idea of dating more seriously when he met Jane.

He knew what he was: a lifetime bachelor. And there wasn’t a woman in the world who could snag his heart long term. He’d be willing to bet on it.

Still, he had a few assets.

He was young, reasonably good looking, wealthy…and he sure as hell didn’t need a pseudo-sweet, temperamental, psychologist chick blowing him off, especially after he’d let his guard down long enough to get close to her one hot summer night. Wouldn’t happen again.

Besides, this was a wedding. There were plenty of smart, beautiful babes to be found—it’d be like cherry picking blue chips in a bull market—and he was the guy to find them. The sooner the better.

He sent the reverend an impatient look as the bride finally reached the altar and Jane took her sweet ole time fixing the train of Beth’s wedding gown.

“So,” he whispered to Reverend Elton, “what do you say we get this ceremony started so we can move on to the reception, eh?”

The reverend glanced at him with surprise, his cousin with a fresh round of bafflement.

Bingley just shrugged and donned his most charming grin. “I just can’t wait to start celebrating the joy of love.”

It Had to Be You~Harry Connick, Jr.

Save the Last Dance for Me~Michael Bublé

Don’t Know What You Got (Till It’s Gone)~Cinderella