In Marilyn Brant’s smart, wildly inventive fiction debut, one modern woman in search of herself receives advice from the ultimate expert in matters of the heart: Jane Austen.

It begins one day in sophomore English class, just as Ellie Barnett’s teacher is assigning Jane Austen’s Pride and Prejudice. From nowhere comes a quiet “tsk” of displeasure. The target: Sam Blaine, the cute bad boy who’s teasing Ellie mercilessly, just as he has since kindergarten. Entirely unbidden, as Jane might say, the author’s ghost takes up residence in Ellie’s mind, and seems determined to stay there.

Over the next two decades, Jane’s wise and witty advice guides Ellie through the frustrations of adolescence and into adulthood, serving as the voice she trusts, usually more than her own. Years and boyfriends come and go, but Jane’s counsel is constant, and on the subject of Sam, quite insistent. Stay away, Jane demands. He is your Mr. Wickham. 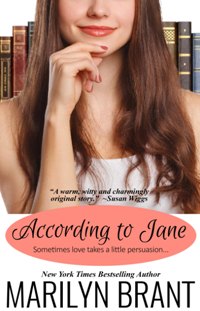 Still, everyone has something to learn about love — perhaps even Jane herself. And lately, the voice in Ellie’s head is being drowned out by another, urging her to look beyond all she thought she knew and seek out her very own, very unexpected, happy ending…

ACCORDING TO JANE ~ A Novel About Pride, Prejudice & the Pursuit of the Perfect Guy

**Note: This book has adult language and content and is recommended for mature audiences.**

This is an excerpt from ACCORDING TO JANE (a novel about pride, prejudice & the pursuit of the perfect guy, or the story of a modern woman who receives romantic advice from the spirit of Jane Austen) original copyright 2009 by Marilyn Brant. Hope you enjoy!

I watched the taillights of Dominic’s Pontiac fade away into the distance, and I thought about our deteriorating relationship. Who I was. Who he was. Where we were going. Or not going. I’d almost broken up with him an hour before, but I’d held on. Why, why, why?

Perhaps it is because you feel lonely? Jane suggested.

And because you are about to embark on something unknown next month–your graduate studies at a new university–and you crave the familiar?

And, additionally, because you will be two-and-twenty next week and wish to celebrate it with someone dear to you?

I didn’t speak, but I nodded. I should’ve known Jane Austen would figure it out. She’d been my constant companion, my most secret friend for years. She spoke only in the silence of my mind, but she knew me as no one else could…or wanted to.

All will turn out right, Ellie, she said softly. Trust in yourself and in your instincts. You have a strong intuition about the honor and character of others. It is stronger, perhaps, than you realize, and it gains further strength with time and experience. Do not despair.

Thanks, Jane, I whispered, fighting back the despair that curled in my stomach nevertheless.

So, a week later, when I found myself sitting at that same Chicago bar Dominic and his pals always dragged me to, after being promised a “romantic birthday dinner for two” we were already thirty minutes late for, I took a good long look around me:

I was in a place I didn’t want to be, with people who talked about big change but did nothing.

I was dating a man who, while attractive and reasonably intelligent, didn’t appreciate me, and who was also part leech.

I was exactly twenty-two (as of 8:28 that morning), unmarried, inhaling secondhand smoke, bored, frustrated and hungry.

The evening couldn’t get any worse.

I grabbed my second white wine at the bar and took a turn about the room–sipping my drink, chitchatting idly and privately with Jane, glancing at the framed autographs hanging crookedly on the walls and contemplating Dominic’s untimely death.

The driving beat of a Def Leppard song came on, competing with the ambient noise, and I felt a gust of hot summer wind next to me as the front door swung open.  The woman who walked through it was about my age and height, only really stunning. Her hair was a long, soft auburn that curled at the ends like some L’Oréal hair-color model. She seemed as gleeful walking into The Bitter Tap as I’d be if I could walk out of it. A tall, dark-haired man followed her inside, and I looked away.

Then I looked back.

There’d been times since high school ended, times over the past four years–indeed, a great many times–when I’d wondered what I’d say or do if I ever ran into the loathsome Sam Blaine again.

I imagined myself holding my head high and carrying on with whatever I was doing without acknowledging his presence.

Or, I thought I might lift an elegant eyebrow in greeting and say with perfect indifference, “Is that you, Sam? I hardly recognized you. You look shorter.”

Or, maybe, I’d be in the midst of laughing over something hysterically funny when someone else would break in and introduce us. I’d shake his hand and pretend not to remember him until he insisted we’d gone to kindergarten and all twelve grades of school together. And that we’d spent one really memorable night in each other’s arms…a night that had inexorably shaped my view of love. Then I’d reply with an amused, “Oh, yeah. Sam. That’s right. Sorry, your name slipped my mind.”

That night, in sad reality, I stood utterly still and gaped at him.

He moved toward me and, as recognition dawned, his handsome features contorted into a look of pure horror.

My God. I must’ve looked pitiful.

Turn away, Jane commanded. You need not speak to him.

But I couldn’t make myself turn away.

“Sam.” His name came out of my open mouth with a veritable squeak.

He cleared his throat. “I’m surprised to see you.  I almost didn’t recognize you.”

I laughed aloud, and Sam shot me an odd look. Yeah.  Irony was a bitch.

“Same here,” I said, though we both knew better. I pointed to the auburn-haired chick, who’d been watching our exchange curiously. “Your girlfriend?”

He nodded and introduced me to “Camryn,” a fellow future medical student with sharp, assessing, green eyes in addition to all that TV-commercial-worthy hair.

Dominic, of all people, chose this particular instant to stride up to us and lay his hand on my shoulder. “Hey, darlin’,” he said to me, but he fixed his gaze on Sam and Camryn. “We’ll be outta here in just a couple of minutes.  Mick’s trying to find an article for me in his bag.”

He pointed in his buddies’ direction where Mick alternately puffed on a cigarette and dug through a rumpled backpack. I knew this task would take another half hour at least.

“We’ve gotta get you to your birthday dinner,” Dominic continued, punctuating his bald-faced lie with a possessive squeeze.

I forced a grin at the jerk. “Take your time, um, sweetie.”

Dominic looked back at me, his eyes widening in surprise.  “Uh, thanks.” He nodded to the couple in front of us. “Hi.  I’m Dominic, Ellie’s boyfriend. You guys old friends?”

Camryn started to shake her head, but Sam said, “Yeah,” before she or I could reply. “Very old,” he added.

“Yep.  Ancient-history old.” I smiled toothily at the other three and took a long swig of my wimpy wine. Crap. I wanted a margaritanow, heavy on the Jose Cuervo Gold.  If ever there was a time for strong drinks, this was it.

Do whatever you must, Jane said, with hot fury in her voice, but get away from that despicable man.

I wanted to listen to her. I really did. But my feet were rooted to the spot for the duration.

Camryn’s gaze ping-ponged between her boyfriend’s face and mine. Her green eyes narrowed. “Pleasure meeting you both,” she said to Dominic and me, her gritted teeth indicating her definitive lack of enthusiasm. “But I’ve been waiting all day for a daiquiri, so, we’ll see you later. Enjoy your birthday…Emmy.”

Camryn cast him a lethal look and began to walk away.

Hmm. So that was how it was.

Sam opened his mouth but then closed it again. He lifted his arm up in a half wave and followed his girlfriend to the bar.

Dominic squinted after them, turned back to me and shot me a puzzled look before rejoining his friends.

Jane, who’d begun ranting with fervor since Sam appeared on the scene, scarcely paused for a breath between words. How insupportable! What an insufferable creature!  The nerve of him to cross your path again after what he did!

I let her continue her tirade of antiquated English insults a while longer as I gulped the rest of my drink. It was going to take an Act of God to stop me from getting one very necessary and immediate jumbo birthday margarita. I pushed the smoky air out of my lungs, scanned for a good spot to squeeze in at the bar and edged up to the corner of it…

The End of the Innocence~Don Henley

Love is a Battlefield~Pat Benatar

I Want to Know What Love Is~Foreigner

You Give Love a Bad Name~Bon Jovi

The Safety Dance~Men Without Hats

And, of course, there’s also:
Blondie
Def Leppard
The Cars
U2
REO Speedwagon
The Fixx
Wang Chung
Asia
The Scorpions
and more…