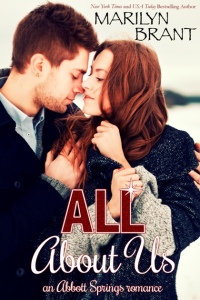 ALL ABOUT US (my sexy romantic novella that was originally published in the ALL I EVER WANTED anthology/January 13, 2014)

Winterfest is heating up in Abbott Springs…

As the town’s yearly festival kicks off, cold days turn into steamy nights, new flames will be ignited, and old romances will be rekindled.

All Sami Abbott ever wanted was permission to be herself. At home, she aims to be the perfect daughter but never measures up. At college, she’s the bold girl who had a one-night stand with sexy musician, Alex Hamilton. When he arrives unexpectedly in Abbott Springs, her worlds collide and she must reconcile the girl she tries to be with the person she really is.
*
ALL ABOUT US is a light, contemporary, new-adult romantic novella by New York Times & USA Today bestselling author Marilyn Brant!
*
Read the EXCERPT at the bottom of the page!!
*
*

ALL I EVER WANTED (Below are details about all four stand-alone stories, which were part of this previously published anthology — each of the novellas is available for purchase individually now.)

All About Us by Marilyn Brant—All Sami Abbott ever wanted was permission to be herself. At home, she aims to be the perfect daughter but never measures up. At college, she’s the bold girl who had a one-night stand with sexy musician, Alex Hamilton. When he arrives unexpectedly in Abbott Springs, her worlds collide and she must reconcile the girl she tries to be with the person she really is. 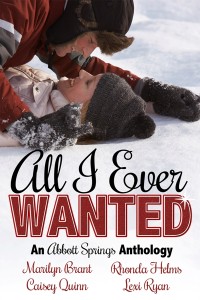 nted was acceptance in her straight-laced hometown. But her best friend and bandmate Justin Cohen is about to show her that what she thinks she wants isn’t necessarily what she needs.

All for Love by Rhonda Helms–All Maya Monterey ever wanted was to belong. Happiest with the Abbott family, Maya’s been secretly in love with sexy pastry chef Oliver Abbott for years. With a flirty new look, she’ll pull out all the stops to get him to notice her. And if her plan fails, she’ll walk away from the only home she’s ever known–and Oliver–for good.

All or Nothing by Lexi Ryan—After years of placing the wrong bets, all Aubree Baxter wanted was someone to take a chance on her. Golden boy Kennedy Hale plays it safe in life and love, but to keep Bree in Abbott Springs, he’ll have to go all in.

EXCERPT from “All About Us”

My mom had put a batch of orange-cranberry scones in the oven just before she’d headed to the parade, so I pulled them out (on time!) and set them on the racks to cool. I washed all the remaining dirty trays and bowls and spatulas. I swept the backroom and took out the garbage and even made a light glaze for the scones. I was in the middle of drizzling the icing on the last row of them when the bells on the front door jingle-jangled. I glanced up, expecting to see a local person I’d known forever, probably an older community member who needed a warming beverage and a break from the parade crowd.

“Hey. Heard through the grapevine you were here.” He grinned briefly at me, and my heart became a puddle of melted icing.

He was dressed pretty much like he had been yesterday—black leather jacket, different jeans (these weren’t ripped, just faded), old sneakers—but he didn’t look quite the same. It wasn’t anything obvious, like his hairstyle or his piercings. It was more like an intensity in his expression. Like he was searching for something.

“So, were you out experiencing more of the Winterfest today? Ice sculpting or visiting the craft fair?” I asked.

“Nope. I slept late. Really late, actually. I was working on a song last night. But—” He shot me another one of those intense looks. “I’d heard something about an Abbott Cupcake Float, so I’d been planning to get a look at this parade. And I saw the float, but I didn’t see you anywhere.” He raised his dark eyebrows, as if an explanation for my being MIA from this one goofy town event was somehow necessary. Did everyone expect me to ride on that damn thing?

I wrinkled my nose. “I took this shift for a friend of mine because she, um, really wanted to be at the parade today. On the float, actually. It’s kind of a long story, but that’s the condensed version.”

“Ah.” He took several strides toward me. We had the serving counter between us, but it didn’t seem like much of a barrier at all. Why was he staring at me like that? What was he looking for?

I saw him swallow and glance at my hands. I was holding the icing bag off to the side of the scones, twisting it so my fingers had something to do. Little dribbles of sweet white icing had leaked out and begun to run down my hand, but I’d barely noticed.

“Yeah,” I said, looking down. Time to finish putting the drizzles on the remaining scones. He watched me do this with interest but in complete and total silence. When I was done, I saw him lick his lips.

I set down the icing bag, wiped my fingers clean and slid a fresh scone onto a plate. “Would you like one? They’re good. Just out of the oven.”

He nodded but didn’t take the plate from me. “Can I come back there?”

I glanced at the front door. Usually, we didn’t let people who weren’t working come into the kitchen area, but there were no customers anywhere in the bakery, and well, I was the daughter of the owners. Mom and Dad weren’t going to fire me over something like this.

Alex slipped through the swinging door off to the side of the counter and joined me. I was still holding the plate out for him. He took it from me this time…and immediately set it on the counter.

“Oh, sorry! Did you want a fork?” I asked, reaching toward the drawer with the silverware.

But he put his hand on mine, stopping me. “No, Samantha,” he whispered. “That isn’t what I want.”

He swallowed again and nudged me toward the kitchen wall nearest us until my shoulders were touching it. Until the zipper of his leather jacket pressed against the red Abbott’s Sweet Confections apron I was wearing. Until I could feel his breath on my forehead.

Then he looked into my eyes and waited. Waited until I’d tilted my head up toward him and licked my lips and leaned a little closer. Then he smiled and brought his mouth down on mine.

Everything about our kiss said hunger to me. We were in a place filled with heaping platters of food, but Alex was the only thing in the whole building I wanted to devour.

It was like my dream from this morning, only better because it wasn’t a simple dream. Because I could really feel the roughness of his stubble on my cheek, smell the crisp January air when he exhaled, taste the warmth of his tongue as it mingled with mine and left me wanting more. More of him. All of him.